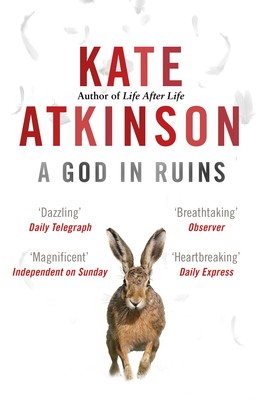 A God in Ruins by Kate Atkinson

Readers who enjoy Virginia Woolf will also love Kate Atkinson. She has that same scatty stream of consciousness style, although this book is more ordered than her first book Behind the Scenes at the Museum. Like Virginia Woolf the more you read her work the easier it gets, you get used to her style and the way she expresses herself. After a diet of linear, but thought provoking, carbs, being faced with a steak and the prospect of having to chew, comes as a bit of a shock, but too many carbs makes you fat and lazy.

We start with Teddy flying in the war, then we see his childhood and his mother, father and siblings. Setting out the characters and the background of the novel. In 1980 Viola, Teddy’s only daughter, is 28 and it centres on her relationship with her partner Dominic and her two children. 1947 sees Teddy and Nancy married and their relationship is a contrast to their daughters in the previous chapter. There are also the wider family interactions and how both Teddy and Nancy adapt to civilian life after the war. 1939 was when Teddy first intended to propose to Nancy, he is 25 and there is the idea that he should be married by then. A declaration of war appears to have interrupted this and we see him joining the RAF. 1993 sees Teddy old and dealing with the inevitable downsize of moving into an old age pensioners flat. Viola and to a certain extent the children appear insensitive to his memories in their efficiency and practicality. 1951 is the year of Viola’s birth and proves to be Teddy’s only child. If 1939 saw Teddy joining the RAF and gaining his training 1942-3 sees him flying in the war and looking after his comrades. 1982 looks at Sunny, Viola’s son and his relationship with Dominic’s family and the difference in attitudes. 1943 sees Teddy have a brief sexual encounter with a young woman in the ATS after getting engaged to Nancy. 1960 we learn of Nancy’s illness and the brain tumour. 2012 is about Teddy’s decline, but also Viola’s change of career and writing, her even greater self-absorption. 1944 sees Teddy back in the war with the first squadron he flew with. This could represent his memories of what happened, in the sense of life passing before your eyes. 2012 also sees Bertie married and have twins. Sunny has become a spiritual teacher in Bali and this brings us up to date with the character’s lives. The final chapter raises the question what if Teddy had died in the war? Nancy would have married someone else and Sunny and Bertie would never have been born.

The only reason for adopting a non-linear approach is to focus the reader’s attention, provide a contrast between two situations and although I have missed some detail in the above summary I do not think this book does enough to justify its structure. If you want to contrast Teddy and Nancy’s marriage with their daughter this can be done through references and does not need the structure of the book to be altered. We get glimpses of Viola, Sunny and Bertie’s lives and how different they are to the previous generation, but again I do not see how the structure adds to this. In the Guardian’s Review of the book they suggest the non-linear structure creates mystery and withholding the fact that Nancy dies when Viola is still so young is the answer to why Viola is so ‘monstrous’ throughout the book. The butterfly effect is common to all wars and that if our parents or grandparents were killed in a war then we would never exist. At the end of the book she is suggesting this is what Teddy’s life could have been like if he had lived, but that then begs the question why give him a life of tragedy where his wife dies young? Perhaps that says more about me and my eternal optimism.

The language of the book is careful, concise and impressionistic, like all post-modern works, but put in a linear order I don’t think it says anything new. My initial thoughts remain, it is not as difficult as some of her other books, but I am not a fan.