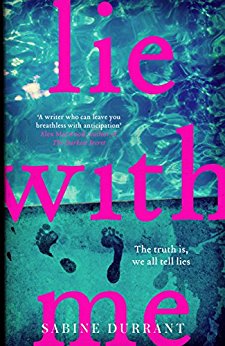 Lie to Me by Sabina Durrant

Personally, as long as the character is not beyond redemption then it will not prevent me enjoying the book. A character who provokes different emotions in the reader is often more interesting.

Narrated in the first person singular this is Paul’s story. A writer who produced one good book then disappeared without a trace. Not because he does not write, only that he has not been able to replicate that previous moment of excellence.

As a successful author Paul clings to the hope that he can still make a living through his work. This not only impoverishes him but everyone around him. He relies on the charity of friends to keep a roof over his head. When he meets Alice, he sees this as a new opportunity for a place to live. Seduce the widow and gain a comfortable place to live and with some more machinations a holiday in Pyros.

I feel sorry for Paul, not wanting to give up on his dream of a full-time author. His experience of success has now faded and he doesn’t want to give up the dream. Yet Paul needs to be practical, living off other people’s favours is precarious. As he points out, he has nothing compared to Alice. Arguably this is no justification for using her as a meal ticket.

The way he looks at the young girls on the island also suggests a crisis. Loss is not just confined to material possessions but status, attraction and power. This makes him an outsider, a more forlorn figure and creates a little more sympathy for him at the end of the book. Paul is not responsible for the events which happen, but he does have a contributing role.

This is a great book with a good twist at the end. My only concern is the author may feel she has hit on a winning formula that she seeks to replicate through all her books.