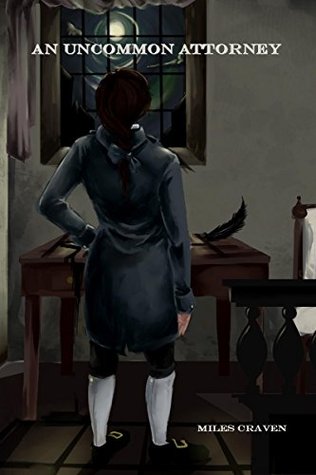 An Uncommon Attorney by Miles Craven

All indie authors take a risk when they stick their head above the parapet, but when you teach creative writing for a living it is even more of a risk. You risk your students reading your work and finding fault, or heaven forbid, thinking they can do better and what is left for you to teach them. Therefore when I stumbled across a book written by a lecturer at the local university I could not resist.

Reading this book you will be in no doubt that the author knows his history. There are numerous references to the French Revolution and the discussions it caused, as well as a passing reference to Edmund Burke. The ridged class divide, racism and homophobia which was undoubtedly present during this period is also exposed. Poverty and the seedier side of life is a little unpalatable, but probably accurate.

My main problem with the book was it appeared muddled and disorganised. It was only in the final chapters when the protagonist goes to see Mr Pitt that things started to change and make sense. The aristocracy were distinguished as being snobbish, idiotic and out of touch, but the lower-class conspirators all merged together making it difficult to separate who was being accused of what and what was their role in the story. Individuals such as James Lapish become red herrings rather than clues to the identity of the killer.

Eagle as the main character is good in exposing the vulnerability of the middle classes. He is dependant on the patronage of the aristocracy for his living and in turn his staff are dependant on him. Even though he comes across as a man of principles, he will not sleep with the maid, he has his weaknesses, succumbing to the wiles of Calvert’s wife. Yet he employs and defends his black apprentice against the scorn of other people. Thus giving him enough depth to standout from other people.

Sometimes the progress of the investigation was long and drawn out. Reference to a newspaper man and his rival, an informant in a pub, even Eagles affair with Calvert’s wife seems an aside to the real aim of the story.

I am tempted to say this falls into the academic trap of trying to be too clever. In order to create a story of worth, plot, sub plot, asides and dead ends are created. Themes are introduced and historical accuracy maintained, but the problem is the main theme of the story gets lost in the confusion.

Overall it is a brave man who writes a book in his own name. I think personally I would have used a pseudonym to remain anonymous, not because it is bad, but to evade the student gossip.