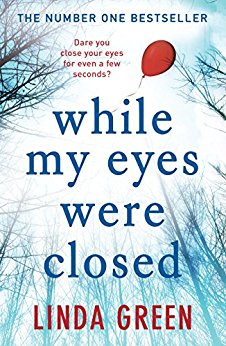 While My Eyes Were Closed by Linda Green

Readers who enjoyed Gone Girl will love this book. A slow psychological thriller about what happens when a child goes missing. It is frightening to think how easy it is to lose a loved one.

Chapters move between Lisa, Muriel and Matthew. What is most interesting is Muriel’s attitude and justification of her views. She believes she is correct, that she is doing what is right. In her eyes the child has been neglected and her intervention would be sanctioned by the state, when they knew the full facts. She is not just the villain of the piece, we can see her delusion and this creates conflicting feelings of outrage and sympathy in the reader. This makes her a more complicated character and by allowing the reader into her thinking and reasoning it intensifies the impact of the novel.

In Lisa we see the families reaction and the way the media interpret the situation both positive and helpful and with negative labelling and speculation. It is interesting to see the consequences of negative publicity, something as newspaper readers we may not consider. We not only see the mother’s desperate reaction, the way she blames herself, but the reaction of the wider family. The need to do something, even if that means taking matters into your own hands.

Matthew’s views give weight to the idea that his mother is possessive and controlling, overprotective and paranoid. The fact that he does not mention Sparrow for fear of upsetting her shows his compassion and level of concern. He is both a thoughtful and caring individual, but his mother’s behaviour has robbed him of his strength and resilience in difficult situations. Matthew is the product of her upbringing and as such some of his failings have to be attributable to her influence.

The ending is both logical and unexpected. Clues are laid throughout the book and it is only at the end when the last piece of the puzzle is included that the whole picture suddenly materialises.
A fantastic book with well drawn, thoughtful characters and a well planned and executed plot.