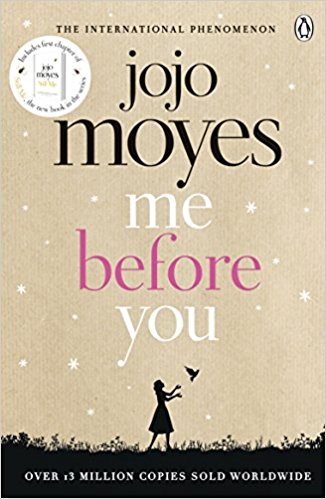 Me Before You – Jo Jo Moyes

One of the most striking things about this book is its perceptive nature. The author introduces the idea that until you have walked with someone who has a disability you don’t know what it’s like, cars parked close together, lack of ramps, uneven pavements, grass, all have their own problems. Told primarily from Louisa’s point of view, we do get the odd chapter from other characters, but it is important from an engagement point of view that it is Louisa. She is the outsider, not tainted by family politics or what has gone on before. Louisa brings empathy and problem solving skills to a situation where virtually everyone has lost hope.

Like most people Louisa wants to help Will see a life and a purpose outside the restrictions of his disability. When trying to help change Will’s mind and discover what is possible Louisa turns to an internet forum. The people there have differing views and you get the feeling if Will didn’t have money his views would be different. I guess as authors we make our characters financially solvent to avoid all the problems of life on benefits.

Will lacks the capacity to forget the past and move forward with his life. He appreciates Louisa’s efforts and wants to encourage her in her own life, to see the possibilities he feels are no longer open to himself. Her efforts were doomed from the start, but it’s a credit to her that she never gives up hope.

There is a suggestion that she experienced her own trauma in the maze which affected her outlook, but I would argue this does not compare to Will’s situation which is continual and all pervading. Louisa’s problem seems to be associated with a single place and she appears to have blocked out the more distressing detail.

It is interesting that it is only the lady at the wedding who truly engages with Will and sees beyond his disability. The other guests feel awkward and do not know how to react, including his ex-girlfriend. This is possibly because of her wok re-training people for different professions.

Family ties and money problems appear to have held Louisa back. A sense of obligation not felt by her sister who seeks to pursue a course at university rather than support her parents financially, leaving the burden to Louisa. When she suggests the job is too much for her and she wants to leave there is panic amongst the family.

Nathan is very professional in his dealing with Will. This is a perfect example of the wonderful work carers do and how reliant disabled people are on their help. He treats Will like any other man, talking about football and current events, but he does not get as emotionally attached as Louisa. Nathan’s concern is for Will’s medical care. This is notable when Louisa and Will return from the wedding and she has not completed the evening routine and Will is unwell as a result.

Camilla, Will’s mother, is obsessed with the welfare of her son, to the detriment of her marriage. She believes money and paying people will effectively change his mind. In this sense she is both naive and desperate. It has been suggested she is stereo typical, but if she didn’t care she would be unsympathetic and regarded as heartless. Arguably she should talk to her son more and not pay a stranger to do it for her, but if she had a strained or distant relationship with him when he was well it is too late to repair it now.

Will had been consistent throughout the book. It is his choice to go to Dignitas and it is not someone else’s right to change his mind. He may feel this is the only situation where he has a choice in a life where so much is done for him. In his previous life he was very physical and in comparison, his disability is very restricting. There is little or no autonomy or spontaneity and he can not adapt or accept the change. With such an intransient attitude any other outcome would have been wrong, nice, but unrealistic.