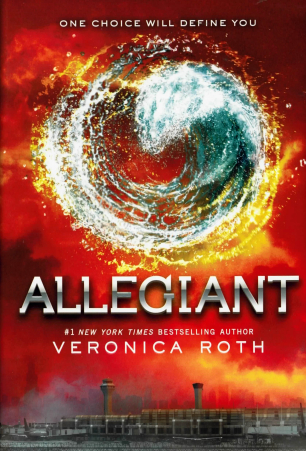 This book is different to the other two, although it keeps the traditional first person narrative of a YA novel. We have both Tris and Tobias’s point of view, alternating between the chapters. It can be a little disorientating if you put the book down between chapters, but the ending confirms the reason for the change in format. It is also interesting to see things from Tobias’s point of view and not have his emotions filtered through Tris. I also feel we get a more rounded view of Tris and her more reckless, Dauntless side.

There are shades of Huxley’s Island in this book with the factions as some kind of experiment in a better way of living, as well as Big Brother and 1984. We also learn more about why the faction system was established and there is an even greater sense of manipulation and control. For Tobias the polarisation is taken even further with both parents being on opposite sides with Tris following Marcus at one point.
The concept of a memory serum is fascinating and a more subtle form of control than the simulation in the previous books. Here memory can be wiped and a new version of history taught. Peter tries to take this a step further and banish his more aggressive and negative traits, but the suggestion is that they begin to creep back. This is the basis for the old argument of nature verses nurture in relation o the formation of personality.

Having both Tris and Tobias’s perspectives enables a deeper understanding of their relationship. It also highlights the difficulties and sources of conflict in most relationships – friends, family, forgiveness, jealousy and makes some very profound comments about the nature of forgiveness. “If we stay together, I’ll have to forgive you over and over again, and if you’re still in this, you’ll have to forgive me over and over again too,’ I say. ‘So forgiveness isn’t the point. What I really should have been tryi9ng to figure out is whether we were still good for each other.”

I thoroughly enjoyed the Divergence series and felt the ending was more satisfying and credible than the Hunger Games. I found the series more complex and relevant to modern day issues of relationship, personality, control and the role of the State. For this reason I would rate it above the Hunger Games and now look forward to seeing the film and reading Four!